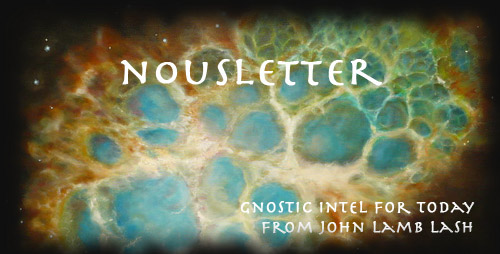 Sailing Across the Gender Rift

[The Nousletter letterhead features a detail of the Crab Nebula, M1, remnant of a supernova that occurred in 1054 AD. Photograph by Hugo Palomares. Full image.]

Hello Again and Welcome to the Nousletter from Gaiaspora.org, offering gnostic intel and Sophianic insight on events and issues of today. This is issue #4 presented by your friendly homegrown telestes, John Lash. The title is Sailing Across the Gender Drift.

In this Nousletter I cover a particular incident in the sacred narrative of the Aeon Sophia, namely, the shearing of the Anthropos template. This incident recalls the classical theme of the “separation of the senses” found, among other places, in Plato (The Symposium). See the section on the monologue by Aristophanes.

*NOTE: At minute 39 of this talk, I name the Aeon Christos as the co-generator with Sophia of the human genome/anthropos plasm. Bear in mind my meticulous correction of that detail of the myth, incorporated into the second edition of Not in His Image and explained elsewhere in talks and writings. For example: Christ or Thelete

Pleroma ; central hub of a galaxy, a massive whirlpool of stellar plasma; real of infinite and limitless potential    PLAIR-oma or Pler-ROW-mah

Pinwheel lenticular spiral : form of our galaxy and countless others

Linked text on metahistory.org: A Planetary Myth from the Mysteries

Teaching technique: narrative and exposition toggled. You recount the narrative by episodes and incidents, and comment or expostulate on the narrative in the discursive mode. To put it in other terms, teaching the Sophianic vision story uses story-telling complemented by exegesis on the actions and themes of the story.

Narrative syntax: creature versus creator. The Sophia myth is a story about all the creatures who inhabit a planetary creature, PAM, the planetary animal mother. But it emphasizes the plight of one creature, the anthropine animal. The humanimal.

Traditionally, all planets were regarded as “animal” or animated creatures. How would this view apply to the inorganic planets which are archontic constructions? Due to the perspective of animism, it is naturally that humans would have regarded the entire cosmos as alive, including the inorganic planets, mars, jupiter, etc. Without the specific intel of the Gnostic cosmology, non-specialists would have attributed the self-evident and verifiable properties of animation seen in the earth to other planets.

Rule of the alchemists: Promise of a Lonely Planet, 1

The original design for human reproduction was asexual cell-division, mitosis, but due to the Gender Rift we reproduce by meiosis. Be sure to understand the difference.

Go to the excellent university site Vcell to see animations with cogent explanations.

Pornography: some of you have asked that I discuss this topic. I will do so, and some of what I say can eventually be found on these Nousletters. What I do not say here can be found on kalirising.org. This I intend to set a boundary between the conventional and transgressive treatments of this topic.